skip to main | skip to sidebar

Because I don't know when I'll be returning to China or Tibet (hopefully by the time my students graduate next summer), and now that I'm back in Louisiana semi-permanently, it doesn't make sense to continue writing at here at Kham Abiding. On the other hand, I've made it through the obligatory readjustment period, and as such don't have a good excuse not to be writing at the moment. There's just too much goin' on, ya' herd?

That said, look for me to be helping fill out the content over at Cenlamar. The nature of that blog is considerably less personal than this one has been. But now that I'm back in the United States, I no longer have anything interesting or exotic to say about my personal life anyway, right?

If  you'd like to get in touch with me, leave a comment to this or any post and it will end up in my email account.  Or you can hit me up directly, dantsmith at gmail dot com.

I spent most of last night with my friend who lives at N. Rendon and Ursalines, but because I took the bike along the bayou back up to Lafitte I didn't hear about what happened last night at Pal's Lounge until lunchtime today. One of my closest friends called my brother to let him know that he'd taken off work because a friend of his had been killed in a stabbing. He had known her from their work at the Road Home program.

The incident is senseless and tragically random. For those of us in the neighborhood it is more a reminder of how fragile things seem now. It doesn't play into this larger trope of the quickening pace of homicides in Orleans Parish.

It's Pal's, and that makes it personal for all of us in Midcity, so I will leave you to get the details yourself. Maitri has more. Sinn Fein.
Posted by Dan Tierney Smith at 7:46 AM 3 comments:

"Why should we leave America to visit America Junior?"

My eldest brother (not the twin) and I returned from a wedding in Canada the other night. Kusang and John were married in a simple ceremony next to a lake a couple hours north of Toronto. They had the kind of Christian wedding that gives you more faith in man than the almighty, a good thing in my book. John grew up near there, in a group of cottages that can only be accessed by canoe in the summer and not at all once the heavy snows have fallen. I've only known them from this year in Kham, but jumped at the chance to see Niagara Falls and Lakes Erie and Ontario for the first time. Here's the lucky couple before I knew them in Lhasa. 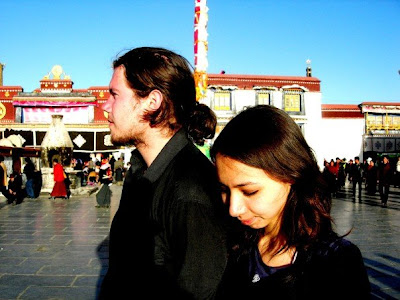 Chris and I were gone for almost a week, just long enough to enjoy the comfortable Ontario weather and slight societal differences without getting used to or annoyed by anything. For me, the familiarity of bracing the dark wall of sultry air that is the exit of Louis B. Armstrong International Airport for the second time in a less than a month was most telling. I've reached the point of no longer feeling like a visitor in New Orleans again, though vainly; in two days time I leave the Crescent City for an undetermined period of time to visit family and friends in Baton Rouge and Alexandria.

The blogging has been thin, as some of you have noted. Wireless internet is spotty among my Midcity acquaintances, most of whom attend school or work in the service or construction industries. The Fairgrinds and other shops would of course do, but the August sun has kept us inside on most days. I'm in fact sweating against my keyboard as I stand on the unfinished plywood that substitutes for kitchen floors in the shotgun where Chris is currently staying. I think he is bidding the tile contract to the owner sometime this week. 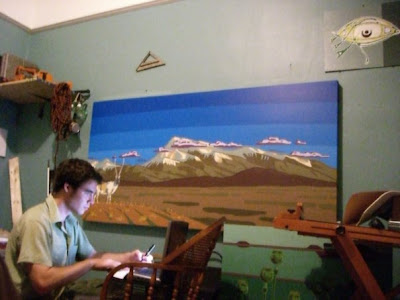 Those're his paintings behind me. It is lazy here but not in the ennui way. We have been catching a lot of fuzzy Simpsons and Seinfeld via the antennae on Channel 38. The first week I watched as Chris put together a couple of works for his summer session studio course: 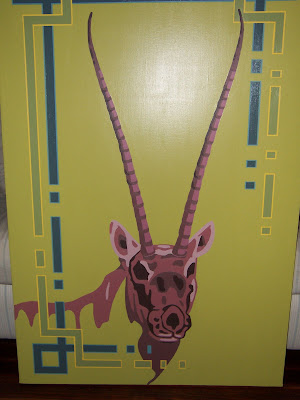 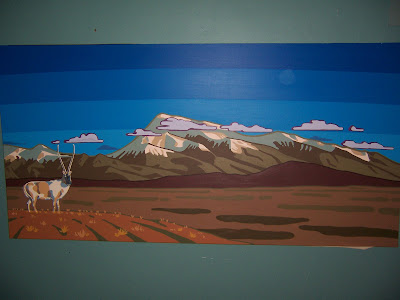 Let's get a detail shot of that Chiru. 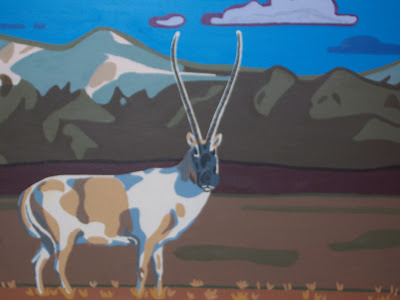 Chris is finishing up his B.F.A. at UNO at the moment, making a living with the side jobs that grew out of the construction work he did in the city all through 2006. He's also sold a couple of other paintings recently: 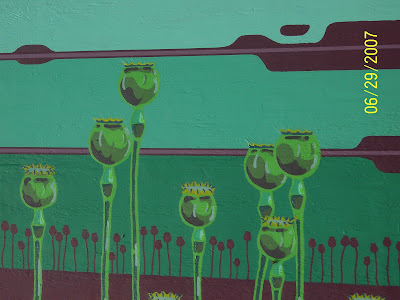 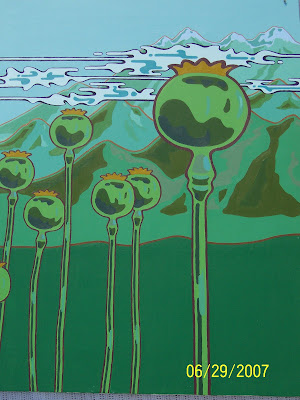 His interest is non-commercial painting, though I've heard him mention landscape architecture. That said, it may have just been a part of his Art Vandelay routine.

Posted by Dan Tierney Smith at 6:29 AM No comments:

You could say I'm back now.

My body rythms, both Circadean and otherwise, have fallen back into sync today or yesterday.

Chris is painting in the studio at school, and I'm waiting for him at the UNO library. It's the little things that are surprising about being back: being able to access Wikipedia, waiting for traffic before crossing the street, bathroom grifitti written in poor English instead of poor Chinese. Beer with hops.

I'm still going through all the foods and drinks that I missed, so many I didn't even think about but am glad to see again. The objects in this world are so many appearances, but I can't find fault in enjoying them now.

Josh mentioned this must be one of the best times of my life, being unattached with the world completely out in front of me. At the time I was dancing too hard on Frenchman Street to decide if he is right or not.

I didn't take this photo, but you get the idea. 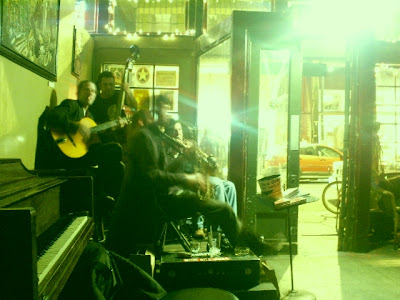 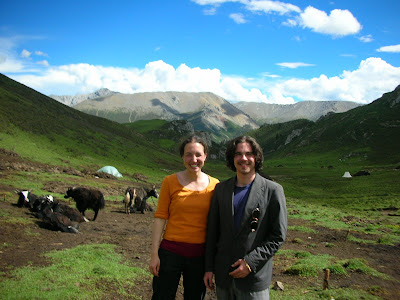 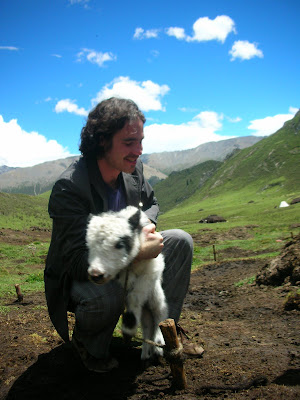 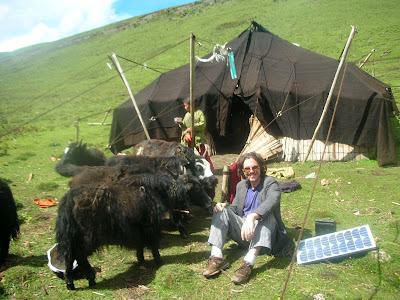 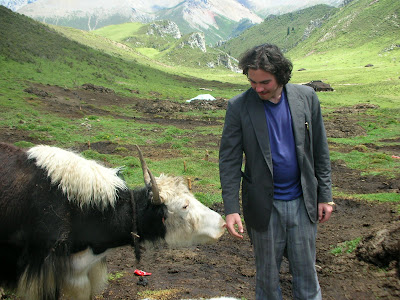 I have these pictures and others from this year up at Picasa.

Posted by Dan Tierney Smith at 7:41 PM No comments:

Today I worked hard to get off the job as quickly as possible, like A Good American.

I finished giving the exam at 10am, had it graded by 2pm, and turned in the students' scores by three. I cleaned and dicked around for an hour, and then went to say goodbye to the students and turn in my key.

The students had already begun their computer exam, so bag on my back I only saw them from outside the room. None of them noticed me. I didn't really give them a proper goodbye after their exam in the morning, but a part of me felt it was better to slip out when their minds were on other things. A lot of the girls cried at our year-end party the other week, and I didn't see any reason to uncork a small river before their examination. I returned my key, negotiated my phone bill with the building manager, and found a car to Kangding.

Besides, I've always kind of sucked at goodbyes. I get reminded of change fairly often, but have difficulty expressing the right emotion at the right time. I am most sentimental in periods of great comfort, ingenuous when parting, and usually don't realize how much people mean to me until after the situation has changed.

I'm feeling, again, the regret that comes from making the right choice.

I now have a bus ticket to Ganzi, halfway to Yushu (Qinghai Province, a part of Amdo) where another Bridge Fund teacher Jon and our old friend Meg are to meet me. After spending a few days with them, I'll drop back down into Kham and see a few more students before starting the long journey back to America. I'll try to be on my email from time to time.

Upon boarding the bus from Chengdu yesterday, a very outgoing Chinese man dressed in sweat shorts and a red fleece bordered by gold cloth began talking with me very directly. I felt he was probably a Rinpoche, and he confirmed this after some time. He was recognized seventeen years ago, when he was in Beijing. This Rinpoche is not Tibetan. He had a broad smile, unhinged and young for his age. The burst blood vessel in his eye gave him an impressive countenance.

He blessed and gave me his mala, small prayer beads made of yak bone. He told me he counted five different prayers: Guru Rinpoche Padmasambava, Avalokitesvara, Manjusri, Green Tara, and one other that escapes me at the moment. He told me he declined to say the prayers for wealth that he usually offers Chinese people. I gave him the black plastic mala given to me by a student in return, and a Kalachakra Mantra sticker I bought as a gift for someone at home.

Rinpoche had been to Europe and was clearly very hip to Western youth. I've had a question on my mind, and I told him that I have been thinking of getting a tattoo of some Buddhist iconography. I'm afraid that my motivation is not correct.

He immediately began performing a mo (ritual divination) in his bus seat, and after some time he told me that he had visualized Manjusri, with his blue sword and red lotus, and that if I liked I should tattoo the sword on my right shoulder and the lotus on my left. 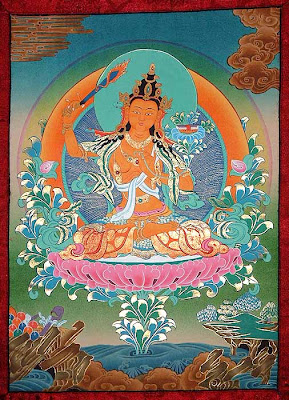 The sword cuts through the obscuration that prevents us from understanding the wisdom of compassion. This thanka is for that Rinpoche, and also for my students, whose thirst for knowledge may never be matched by the apparitions of our world.
Posted by Dan Tierney Smith at 8:33 PM No comments:

I hope to complete my final report tomorrow morning, though I still have a tutorial, three classes, and a test to get through before I can really say I'm finished. Even then I'll need to incorporate the scores into my report, and I haven't even started the thirty-odd student evaluations I need to write.

Now that I'm wrapping things up, it's nice that the Bridge Fund, an organization for which I am technically only a contractor, has finally gotten its website running (please take heed, those of you who have followed the link in my sidebar and found only a picture of a yak-hair tent and an "under construction" notice). I really encourage you to look through the new site if you have time, especially the photo gallery. They really did a remarkable job.
Posted by Dan Tierney Smith at 11:50 PM No comments:

Blogging from the Far East

The Seal of Acadiana Self-Reliance 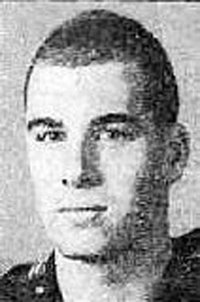